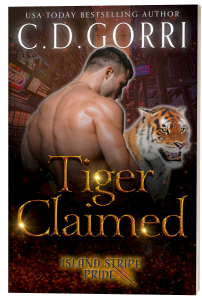 His Tiger wants to claim her, but she wants to reveal his secret..

The Shifter Council of New York City has announced a warning to all its citizens. Danger is lurking on the horizon, and now more than ever, the supernatural community must work to keep their secret. With increasing reports from normals of supernatural activity in the Big Apple, their entire existence is at risk.

Trench Tora is and Enforcer for the Island Stripe Pride. When his Neta sends him to investigate a vlogger claiming to have seen a man turn into a dog, he doesn’t expect to be attracted to the curvy beauty. More than that. He thinks she’s his mate.

Bria Grotto is trying to make a name for herself among the millions of paranormal investigators out there by investigating claims of the supernatural in the big city. Just when she thinks she caught her big break, Bria finds herself hunted by the very creatures she means to catch on camera.

Should she trust the big, sexy stranger who comes to her rescue? Even if it means giving up her prize footage?