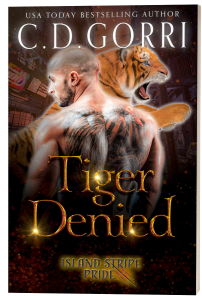 She shoved him away once, but this Tiger won’t be denied….

Every year the Island Stripe Pride hosts a gathering for the other local Shifter groups at their mountain resort in upstate New York. With his new promotion within the Pride Carter Marrow is placed in charge of the entire thing. That includes finding a last minute replacement chef to cater the massive Shifter gathering.

There’s only one woman capable of pulling off that kind of job. Antonia Casabella, the one woman in the entire world he swore he’d never speak to again. Chances were she’d turn him down, but was he willing to take the chance?

Antonia grew up near the Island Stripe Mountain Resort. She’d spent many a month playing on its grassy hills with the Tiger Shifters who owned it despite the fact she was a Rabbit Shifter. It was rare even in the supernatural world for prey to mix with predator. When friendship turned into something more, she had no choice but to deny her heart. Refusing to find a mate among her Flock, she finds work the only possible outlet for her grief.

The last person Toni expected to see walk into her catering company offices was Carter. The Tiger Shifter is looking to hire her for a special event at the resort.

Can this Bunny hold her own against a group of less than friendly Big Cats? And will Carter put their past aside long enough to get the job done?