Hey all! The Wyvern Protection Unit books are getting a makeover! Stay Tuned for 2022/23 release info!

Hatched in a science lab after three hundred years of waiting, the four Wyvern eggs had changed hands many times over the centuries. After finally being discovered by the U.S. government sitting uncatalogued on a museum shelf, ex-Army general Arthur Wessex raised the brothers as his own. The brothers Wessex are four Wyvern Shifters, the first of their kind, named for the unique coloring on each of their eggs.

At the hands of their adoptive father, the brothers learned combat, stealth, and above all, honor. Together they are an elite, and secret, force working for the federal government. The Wyvern Protection Unit is the only one of its kind. They have sworn a duty to protect and serve wherever they are needed.

“With honor and faith, we vow to keep safe those in our charge. Our lives for theirs, until our bodies turn to ash and our fire runs cold.” 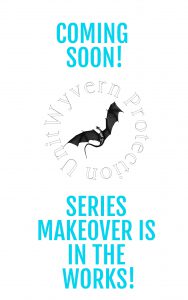 He’s a born protector, but will he remain hers?