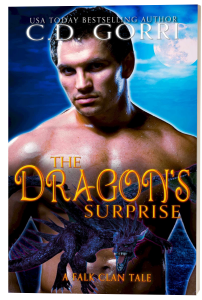 Nothing can surprise this six hundred year old Dragon, except maybe her.

After the fall of the Blackthorne Clan, Devine and his brother, Nicholas, find themselves in Falk Clan territory. After a little misunderstanding, okay, a big misunderstanding, the two brothers are invited to stay to learn all they can about the modern world.

What choice do they have? Without a Clan, a Dragon was vulnerable, and Devine Graystone refused to fade away into the abyss. After all, he still had his brother. The last of their family line, it was said a Graystone always did what was right.

But judging right and wrong in today’s world was an impossible task! This QuartzDragon was more than wary of what passed for morality. He was downright tired. Maybe he was better off on the ruin that was the Isle of Pain. Of course, with the right woman, the grumpy Dragon could change his perspective. But who would want to tame a cranky Dragon like him?

Sunny Daye was as bright and perky as her name. When a girl had hippie Werewolves for parents, she kinda had little choice in the matter. Bright and cheerful, that was her norm. This curvy little she-Wolf works was loving her life in Maccon City. She’d recently taken over her family’s produce store and was working on some exciting new advertising to bring in the customers.

With a heart as big as an ocean, Sunny was always looking for the next adventure. But was there room enough for an ornery Dragon in her happy go lucky life?