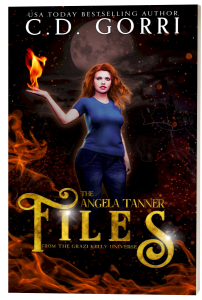 The reality may change everything.

Things in Northern New Jersey just got a little more intense for Angela Tanner. She is a Witch who hasn’t come into her powers yet, but things go full speed ahead when her father is accused of a crime he didn’t commit.

Enter Jody Nieves. The tall, dark, and powerful Guardian is sent to fetch her and observe as she tries to clear her father’s name. He does more than that, he wakes up a part of her she never dreamed existed.

Can she save her father in time, trust that Jody’s attentions are genuine, and discover the truth about her own powers?

Sometimes the truth comes at a cost…

Teenage Witch Angela Tanner is learning to control her powers, but it’s not as easy as it looks. Especially when everything points to her being a Fire Witch. Is her awesome power a gift or a curse?

That’s something she must find out. At least she’s not alone. She has the help of her own personal Guardian, Jody Nieves. Together, they set out on a journey to discover the truth behind her powers.

Can she learn control in time to save herself?

*This special edition is AVAILABLE ONLY IN PRINT. You can purchase the ebooks separately here.