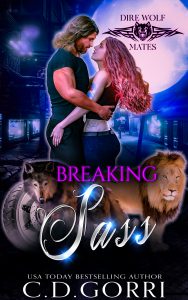 What happens when a sassy Dire Wolf, with a penchant for breaking rules, and a Lion, who’s in love with the law, clash?

She’s a sassy Dire Wolf with a fondness for speed, and he’s a lethally sexy Lion who knows how to lay down the law. Get ready for fireworks when these two dominant personalities clash!

Sheila Rand is the only female member of the Dire Wolf Motorcycle Club. Rare and powerful Shifters, the Dire Wolf MC has decided to make Blue Valley their permanent home. As the Alpha’s cousin, Sheila’s outspoken nature and habitual defiance are overlooked by her Packmates, but not by him.

Mr. Law and Order thinks he can break her, but he doesn’t know who he’s dealing with. This she-Wolf does not want a mate. Especially not a puffed up pussycat!

Leonard Crowley is one of Blue Valley Police Department’s only Shifter Detectives. He’s worked hard to keep the Shifter secret, doing his utmost to blend in with mainstream life. With his father ailing, Leo is called home to confront certain issues that have popped up in the Blue Valley Pride. The elders insist he name one of their females as mate to assume his rightful position as King of the Pride, but Leo has a surprise for them.

Leo has already met his mate. He just has to claim her.

Will the feisty couple discover that breaking sass is much more fun together?