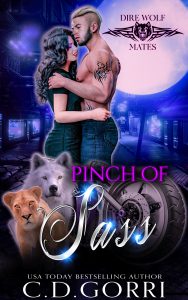 Can this stoic Dire Wolf admit the sassy feline is his fated mate and stake his claim?

Ariella Golden needs to persuade sexy Dire Wolf Beta, and the amazingly talented chef at Serious Moonlight, Brock Laurent to use her Pride’s corporation, Eat Well Live Proud, for all the roadhouse’s needs in order to win her company’s coveted quarterly prize.

But that was not the only reason! EWLP offered the best organic, non-GMO, and responsibly harvested fish and meat. The only problem was the stubborn lil’ doggy happened to be her fated mate, but the darned man was avoiding her!

Brock was perfectly content to cook good food, listen to classic rock, and hang out with his Pack in there new home in Blue Valley, New Jersey. Everything was going great- until she walked into his life.

Now the curvy, curly-headed goddess was all he could think about! Trying to ignore the pull of his mate is a losing battle, so Brock develops a plan to test whether or not the virginal hellcat can handle all of him.

Stunned when Brock propositions her, but with the encouragement of her family, Ariella agrees to a single night in her sexy mate’s arms to seal the deal that will put her in the running for EWLP’s quarterly prize. After all, it might be the only way she can get the big dummy to realize she is his mate.

Will the sassy feline prove that she can take anything he dishes out?