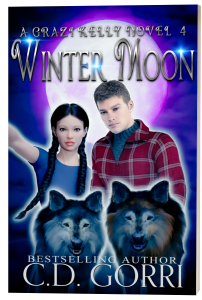 “It was difficult to remember the girl I used to be when my Wolf instincts were at the forefront as they were now.

I closed my eyes and counted backwards. A little calming technique Cara had told me in one of the rare moments during our training when she was not out for my blood. It was a useful tool. When I opened my eyes I could think more clearly. The footsteps were closer and any second their bearers would break from the stand of trees into the small clearing where I was being held.

I braced myself, but nothing could have prepared me for the sight that came next. Angela’s fiery red hair broke through the tree line followed by a tall mystery guy with dark hair and a limp Wolf in his arms. I knew that Wolf. It was Ronan.”

It’s St. Lucy’s Day and the battle has begun! The Demon Molloch is rising, will Grazi have the power to defeat him? Find out in Winter Moon!

*Get the complete Grazi Kelly Novel Series now on Amazon!