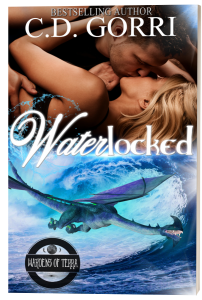 The Wardens of Terra 3

Welcome to the Wardens of Terra, an elite group of Shifters destined to save humankind!

The Hounds of God have been disbanded by the Catholic Church, leaving a terrible void in the fight to save humankind. As a result, a much older organization returns to power and takes up the reins to fight to save the Earth from the evil that stalks it.

They are the Wardens of Terra, an elite force of Shifters each with a defining power to aid them in the never-ending battle against the forces of darkness.

Alone they are fierce warriors. Once they’ve found their true mates, they become an unstoppable force. These are their stories.

Will Nathan Silvertongue, a cranky SeaDragon, change his attitude after he gets trapped by sassy Witch and Junior Station Master, Phoebe Bright?

Nathan Silvertongue is a Dragon Shifter and a Warden of Terra. Called into duty upon the disbanding of the Hounds of God, Nathan ignores the first few attempts of the Heralds to get in touch with him. Living on a tiny unmarked island, the SeaDragon left mainstream life decades ago, preferring his isolation and solitude, but that all changes when she shows up.

Phoebe Bright has been promoted to the rank of Junior Station Master by the Heralds of Terra. Her job is to wrangle and confirm assignments for her charge. If only she could find him!

Tracking down the elusive SeaDragon hasn’t been easy, but this Witch isn’t about to give up. Not even when he slams the door in her face. Literally.

If he won’t talk to her, he won’t talk to anyone! Phoebe conjures a spell that leaves the two of them on his island without any means to communicate with the outside world until they come to an agreement.

Sparks fly as tempers and lusts grow wilder with each passing day, will they survive being waterlocked with only each other?