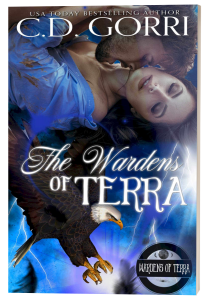 Welcome to the Wardens of Terra, an elite group of Shifters destined to save humankind!

The Hounds of God have been disbanded by the Catholic Church, leaving a terrible void in the fight to save humankind. As a result, a much older organization returns to power and takes up the reins to fight to save the Earth from the evil that stalks it.

They are the Wardens of Terra, an elite force of Shifters each with a defining power to aid them in the never-ending battle against the forces of darkness.

Alone they are fierce warriors. Once they’ve found their true mates, they become an unstoppable force. These are their stories.

Instant attraction won’t stop him from doing his duty, but there are some things a shifter just can’t fight!

Sexy Fox Shifter, Isabella Fuente has spent years learning to harness her powers and trying to forget him, the man who broke her heart.

Will Nathan Silvertongue, a cranky SeaDragon, change his attitude after he gets trapped by sassy Witch and Junior Station Master, Phoebe Bright?

Rex has everything he ever dreamed of. Power and position. Everything except the one thing he never wanted, a mate.

*All 4 stories have been newly edited and formatted