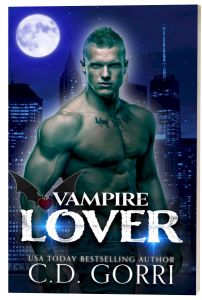 Daisy Amante just took over the lease on a great apartment in New York City from one of her old boarding school chums. Little does she know her neighbor and landlord is a real live Vampire!

The redheaded hottie tries to hide his sexy good looks behind button down shirts and nerdy looking glasses, but Daisy can see right through his façade. Terrence is something special and she is going to find out what!

Terrence has been sating his Vampire side for years with the bare minimum of blood from specialty butchers, but the second he gets a whiff of his new neighbor he knows there is nothing else that can satisfy his hunger.
He craves Daisy Amante in a way he swore he’d never indulge in again. He tries to fight his urges, but what’s a Vampire to do when a sexy curvy goddess knocks on his door in the middle of the night in nothing but her panties?

Can Terrence resist? And will Daisy willingly tie herself to her Vampire lover for eternity?