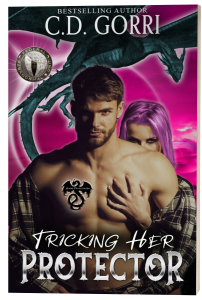 He’s a born protector, but will he remain hers?

Heliodore Wessex knew the female assigned to him was hiding something. Something big.

The words top secret were practically stamped across her forehead. Without the truth, he doesn’t know what to make of the pink-haired siren.

Not that it matters to his Wyvern. His beast is more than willing to aid the tempting female, but will his desire outweigh his need for the truth?

Daeja crash lands on Earth after her Commander demands she retrieve four stasis pods that had been sent to earth decades ago. The male was as untruthful as he was unworthy. But she has no choice but to obey when he threatens her grandfather.

Imagine her surprise when she is caught by the Federal Paranormal Unit moments after she lands. Daeja is wary of her guard and has reason to be. The seven-foot-tall male threatens to send her into her heat cycle with just one of his thorough glances.

Can she trick her protector as the FPU demands, or will his relentless pursuit of the truth endanger them all?