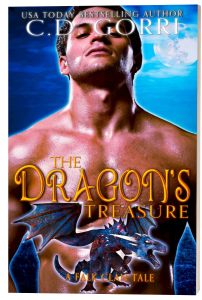 She doesn’t believe in fairytales, until a Dragon comes knocking on her door.

Castor Falk escaped from the ruins of Castle Blackthorne on the Isle of Pain with one goal in mind, to find his half-brothers. If anyone deserved to hear tell of the end of Dragomir’s reign of terror, it was them. Besides, what else did a dying Dragon have to do with the little time he had left?

Jozette Keeper was too old for story time. That didn’t stop the curvy normal from indulging in the longtime tradition that filled the bookstore with local children every day at two o’clock. It was just something to pay the bills while she worked on her non-fiction book.

When a handsome stranger knocks on her door in the middle of the night, she finds herself in the middle of her very own fairytale. Is Jozette willing to take a leap of faith to save the dying Dragon at her door?

Castor needs help locating his brothers and winds up knocking on the door of the one person he never thought to find. His fated mate. Was Fate cruel so cruel as to deliver his garnet rose only to take her away again?

The Dragon must decide, either tell her who she is to him and bring her the pain of his imminent death, or simply fade away from memory.