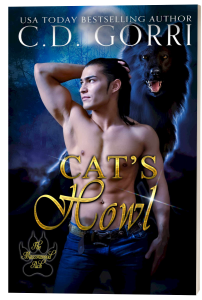 Cat Maccon was always a handful even as a pup.

Will spunky Werewolf, Cat Maccon, find true love with her brother’s Wolf Guard, Tate Nighthawk, or is it too late for them?

Targeted by their enemies, Cat is assigned her own personal bodyguard. The one Wolf in the Pack who won’t be taken in by her wily ways, Tate Nighthawk himself.

On the run with no way to contact the outside world, their tumultuous past catches up with them when forced into close quarters.

Tate is determined to honor his friendship with Rafe, her brother and his Alpha. Alone with the one woman he has always desired, he must admit his feelings or let her go forever.

When Cat is captured by the rogue Wolf who wants to take the Pack for his own, there is only one thing she can do to survive—

Will these true lovers win, or is it too late for them?