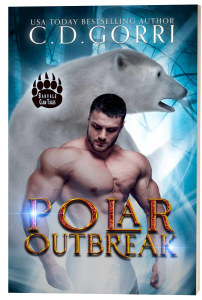 She’s looking for a mate who can handle all of her. He’s the only Bear who can!

Locke Nanouk is one big Polar Bear Shifter. At seven-feet three-inches tall and half as wide, he towered over most everyone he met. The largest of his fellow triplet brothers, he was used to being the odd man out.

He never thought he’d fit in, especially not in Barvale, New Jersey where the local female population tended to run towards petite. Everywhere he went, women just seemed intimidated by him. As such, Locke never imagined he’d find a mate of his own. Until she walked into his life.

Nita Jacobs is a Black Bear Shifter, a member in good standing of the Barvale Clan, and a woman looking for her mate. Dating wasn’t easy for the six-foot tall small business owner. In fact, the curvy female was having a hell of time finding a Bear who was man enough to handle all of her.

She was starting to think she’d be single forever, until she runs smack into her mate on the one night she finally agrees to go out with her friends. But what’s a she-Bear to think when her mate tucks tail and runs from her? Determined to claim what’s hers, she launches a campaign to win her man.

Bundle up Barvale, there’s a polar outbreak headed to town!