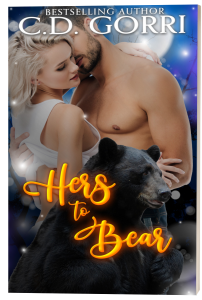 Barvale might be home to one of the biggest Bear Shifter Clans in the entire continent of North America, but shhhh…it’s a secret!

A social pariah and the butt of every joke in her grade, it was no wonder she’d promised herself to never step foot in that godforsaken town again. But when her dad has emergency surgery, who else can help? Maisy returns home to find things are a mess. The tractor is broken and there are only a few hours until the

Arthur Lance just opened his third full service garage and automotive repair shop in his hometown of Barvale, New Jersey. Business was going great, but his Bear wasn’t satisfied with a job well done. The silly animal was still pining for the one who got away back in high school. Burying himself in work was the only thing he could do to keep his beast placated and his human side sane.

Maybe his fate is to be alone as punishment for hurting the only female he’d ever wanted? His Bear can’t stand the thought. He’s stuck at work on Mischief Night, when to his surprise he gets a frantic call from Maisy Daniels herself. Finally, Arthur has another chance.

Will Maisy accept him as her fated mate when he finally reveals the truth?

*As seen in A Cursed All Hallow’s Eve Anthology