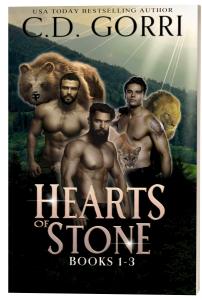 Three Shifters with hearts of stone.

Three women with spines of steel.

ex-soldiers have built around their hearts?

One thing is certain, they won’t give up without trying.

Keeton Grey is an Eastern Mountain Lion Shifter with a serious people problem. As in, he hates all of them… then Marilena Sorelli stumbles onto his land and

Silas McKennon is a corporate shark, er, Lion. All business, this hard-hearted male hates women. He simply refuses to have anything to do with them. Well, except for one. Larissa Clark.

When Niels Orson is summoned home to attend his grandfather’s funeral, he isn’t prepared to see the one person who could upset his whole life. Edie Battista.