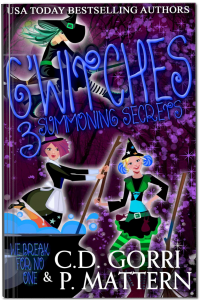 With wands at the ready, triplet G’Witches Olivia, Esme, & Agatha gear up for a new year at Magnifico!

As a new school year swings into gear, Olivia, Esme and Agatha resume classes adored and supported by their Uncle Rufus and best friends Audra and Melvin St. Paul. With Melvin’s ongoing absence as he continues his program with the Austere Brotherhood, his oath to remain celibate is wearing on Olivia, and when she finds herself openly courted by one of the more dashing Professors at Magnifico, she struggles with temptation.

Upon Melvin St. Paul’s triumphant return, he is immediately enlisted by Headmaster Magnifico to help solve a mystery and protect the school-

Someone from within Magnifico has loosed a powerful spell that is wreaking havoc on the residents of Magnifico, including the Administration.

Two witnesses observed the dangerous casting, but refused to come forward because they both have something to lose by doing so…

The perpetrator is out to right a perceived wrong that happened 33 years before, when powerful Magical Artifacts known as “The Secrets” disappeared from their hiding place in the vault under the Chapel Altar.

Murder, revenge, mystery and the tender yearnings of Young Love-

It’s another rollicking YEAR at the Magnifico Finishing School for the Magical Arts!