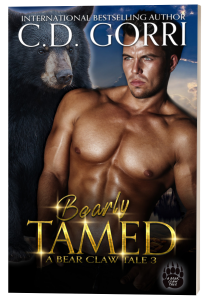 He’s a Clan Enforcer who’s sworn off women. She’s a human female looking for protection. Will fate bring the two of them together?

Lacey Esmerelda Alain can’t help being beautiful. She was born with a face that is both a blessing and a curse. When her jealous ex-boyfriend turns into a monster before her eyes, she looks for help in a bakery of all places!

Daniel Devlin is the head Enforcer for the Barvale Clan. He is also one of the owners of Bear Claw Bakery Inc.

Daniel hasn’t even thought about the opposite sex since his fiancée left him standing at the altar. That is, until he meets her. The stunning beauty makes his Bear stand up and growl, but he forces himself to ignore her.

Resolved to spending his life alone, he is prepared to devote himself to his duties family and Clan, but unforeseeable circumstances send her rushing into his arms.

Afraid and injured, Lacey comes to Bear Claw Bakery looking for help after her psycho ex-boyfriend revealed himself to be a dangerous Shifter. Crazed with jealousy the man threatens to kill Lacey, but Daniel’s protective instincts kick in.

Can he keep things professional, or will his Bear demand he claim the beauty for his own?