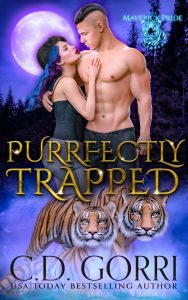 Gretchen has spent a lifetime searching for love. Now the only man she wants thinks he’s a Tiger!

Cut It Out is open for business! Moving to Maverick Point for affordable rents and to be near her bestie was a no brainer. But Gretchen had no idea her first client was going to be six and a half feet of gorgeousness.

Hot or not, the man is desperate for a trim and shave. Not a problem. Well, it wouldn’t be, if she could stop staring at all those muscles and focus on his unkempt locks instead. But a girl’s got needs…

Reg has been trying to make amends for past mistakes, neglecting other things in the process. Like his hair and beard. Not good for a Tiger chosen to guard the precious Nari of the Maverick Pride.

When Uncle Uzzi comes for a consultation, he orders the Tiger to get his overly furry butt to the new salon pronto. Reg isn’t too convinced the Witch knows what he’s doing, until the second he enters the salon and scents his mate.

There is just one problem. The sassy stylist doesn’t know a thing about Shifters. Can Reg convince her to be his? He has no choice.

This Tiger won’t rest until the fiery little human is purrfectly trapped.