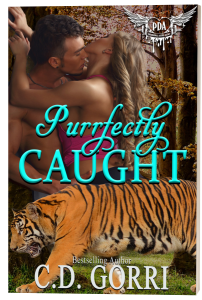 Kylie is determined to stay alone to keep her new Pride safe, but what’s a Tigress to do when her mate won’t take no for an answer?

Kisses By Kylie has taken the world of e-commerce by storm and Kylie has never been so busy. After travelling under a dark cloud from her small South Carolina Pride to Maverick Point, New Jersey, she finally has friends, a home, and a Pride of her own. So, why did she feel so empty inside?

Michael Turner, or Mikey, as he’s called by those close to him, is the Pride healer. With the Nari being so close to her due date, he dare not venture far from the Pride House, even if it is to woo his reluctant mate.

When Gerri Wilder comes to Maverick Point with news that Kylie’s old Pride wants her back, he is forced to make a decision that puts him at odds with the blonde beauty. But it’s just what he needs to catch his curvy little Tigress.

The doctor is in and he won’t rest until the petite bombshell is purrfectly caught.﻿