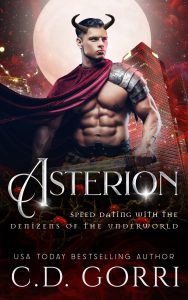 Speed Dating With the Denizens of the Underworld

He’s a bull in a china shop, but she’s not taking any crap!

Fanny Meyers’ name is the butt of every joke in the Underworld—pun intended. Wanting to advertise her pottery shop, Kilning It, Fanny decides to sponsor a night of Speed Dating at the Underworld Café. After all, her place is just the thing for second dates, offering couples’ classes in the art of ceramics crafting.

It all seems like a great idea, until the two females who run it want her as a client! Can this half-Demon Witch survive a night of speed dating with some of the Underworld’s randiest denizens?

Asterion is a former Prince of Crete, and he’s searching for his mate. But this bullheaded Shifter is a tough sell. After all, he does not like movies, hates games—especially mazes—and he loathes loud music of any kind.

Can a spoiled Shifter prince and a Witchy artist with a bad attitude fall in love in this steamy paranormal romance tale?

*Asterion is book 21 in the Speed Dating with the Denizens of the Underworld shared world, filled with saucy half-Demon Witches, brazen Bull Shifters, and more.