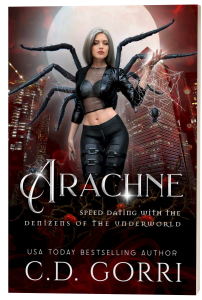 This spider shifter is about to get caught in a web of love!

The owner of the Underworld’s premier boutique, Metamorphosis, is too busy to find a boyfriend. Of course, when Eve and Aphrodite set their sights on fixing her up with the man of her dreams, what choice does she have?

It’s off to a round of speed dating for the sassy spider shifter. But Arachne has her misgivings. After all, who could love an eight-legged freak like her?

Griffin Jara is a legate in the Daemonium Guard. Dedicated to his job, the solitary Demon is known for defeating his enemies with his venomous charms. Those same charms have kept him single. All work and no play, Griff’s coworkers are sick of his is impossible attitude.

Ordered to attend the Underworld Cafe’s Wednesday night speed dating event, Griff meets an unusual female who might be able to solve his problem. But can he keep his lust in check long enough to fulfill his end of the deal?

Find out if the sexy demon and the spider queen find compromise in this steamy Underworld tale.

Arachne is part of the Speed Dating with the Denizens of the Underworld shared world, filled with lustful half-demons, sultry spider shifters, and more.