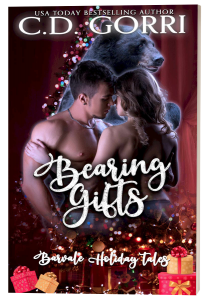 She’s making a list, and he’s checking it twice…

Wade Kettle is raking in the dough, and the females, at his new place of business, Barvale’s own Bar None. He’s gorgeous, charming, and has the sexiest body Charity has ever seen.

The man was number one on her Christmas list! In fact, he was the only thing on it. But what’s a curvy waitress gotta do to get some attention from her stud muffin boss when the Bear doesn’t even know she’s alive?

It’s nothing but champagne dreams and beer bottle pockets when it comes to love for Charity Smith.

He is ready to be taken seriously, but everyone wants a piece of Wade—including the cute little Vixen he hired a few months ago. She’s hot alright, but this former playbear is through playing the field.

With all his pals finding their fated mates, Wade can’t help but think there is more to life than another notch in his bedpost. To prove he’s changed his ways, he vows to spend this Christmas alone.

But when someone plays Cupid with this year’s Secret Santa, the Black Bear is in for a big surprise.

Will the Vixen get her Christmas wish, or will Wade mess up his only chance at true love?

Sometimes the only way in out of the cold is to come bearing gifts.