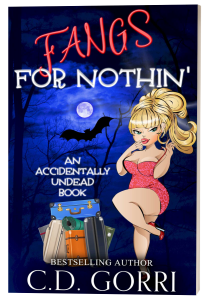 She doesn’t believe in vampires, until one bites her.

Lorelei McGiven isn’t known for her great judgement calls. When she answers an ad boasting an all-expense paid vacation at an exclusive resort for people who enjoy the nightlife, the curvy normal gets a little more than she’s bargained for. Imagine her surprise when she hooks up with a totally hot, totally hungry, bloodsucking vamp.

The thing is, she kinda sorta doesn’t realize her new boytoy is a little bit undead until after he bites her. Lorelei is furious, and worse, she’s getting hungrier by the minute.

Xavier DuMont is a Vampire Prince. He is determined to bring the Tenebris Clan into the 21st Century, but first, he needs to relax. What better place than the Sanguine Vita Vampire Retreat? With scrumptious delights promised to all who attend, Xavier can’t resist the promise of a getaway with libations included.

The royal bloodsucker was not planning on meeting his fated mate. But once he sniffs her out, Xavier will do anything to keep her as his own.

Can Lorelei resist the temptation that is Xavier? Or will she give into her thirst and embrace being accidentally undead?